Hi Guys,
I am having problems installing the MITMF framework. I have tried several times following various online tutorials and each time it has got so far then failed. I have had to ditch several snapshots and start again but I still can’t do the course because I don’t have the tools. (Thank god for snapshots!!)
The course is presented as if MITMF is already installed and I AM using Kali 2017 as directed in the setup but it aint there!!.
Can anyone point me to an easy install for the MITMF that works.
Many thanks

I thought a simple apt-get -y install mitmf would work. What kind of trouble are are having?

Thanks for getting back to me.

Can you direct me?
Many thanks

I have tried like you did and got nothing. However, there was an announcement for a new version of Kali coming out on 18th February so I waited a few days to see if there is any difference.

I managed to get it running following the github instructions.

After that you can check

or go strait to

thank you sir!! That really worked. now I am getting this error,

i followed all the step i get this error
File “/home/sodead/MITMf/mitmf.py”, line 38
print get_banner()
^
SyntaxError: invalid syntax

Are you using python3? In python3 that will be invalid syntax because you need to put brackets. It should be like this - print (get_banner())

i’m accually getting the same error , could you tell if you solved it?and how?

Did you read through all the comments above? The answer is already given above? If you still are getting an error then attach a screenshot of it

Sir I am having issue with MITMF

The error is because of the print statement. For python 2 the print doesn’t include parenthesis but for python 3 you have to put parenthesis. So it will be print ()

It is highly advised that students understand the basics of Python scripting before diving into these courses. Just copying and pasting without knowing what the code does will not teach anyone anything in the long run.

sir, after that statement, there are plenty of lines shows errors and import statements also showing errors. 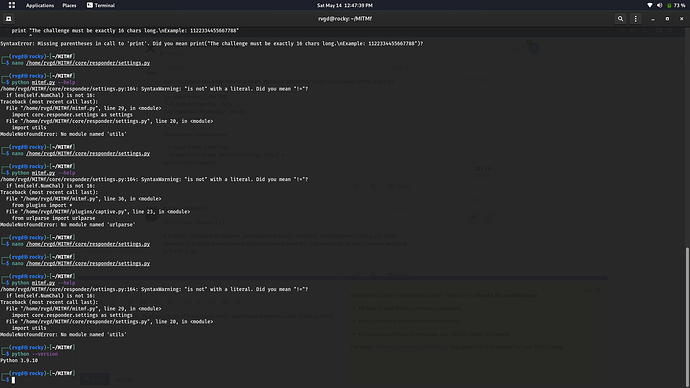 you are using python3 for that and this code was written in python 2.7
to fix this:

and you can now run without error