I signed up for Learn Python & Ethical Hacking From Scratch via stationX recently and over the weekend I attempted to download (and subsequently uninstalled) Virtual Box 6.1.4 aligned with the extension pack and Kali 2020. After several downloads and uninstalling scenarios I am struggling to get kali running.

When I click on Kali to start the package opens and begins but then it does not proceed to the next stage of permitting me to enter user name and password. Instead, kali abruptly closes, an unexpectedly closed report for Apple appears and the message showing for Kali in virtual box displays kali as being ‘aborted’.

Any suggestions on what I ought to do to get kali to run and not simply abort ?

I have been hearing about this issue with Macs recently. Try uninstalling the Virtual Box completely. Delete all the VM files for Kali Linux that you have and then install everything again. Another thing to do after this would be to disable the audio driver in the VM settings while installing kali. I have heard that the audio driver is causing some issues lately.

Thanks for the helpful reply.

I did exactly as you suggested and it’s opening up fine.

I’ve uploaded a snapshot (screen grab) to show where I untick the audio prior to re-installing Kali just in case anyone else experiences the same issue.

I will be now able to continue following along to the lectures over the weekend. 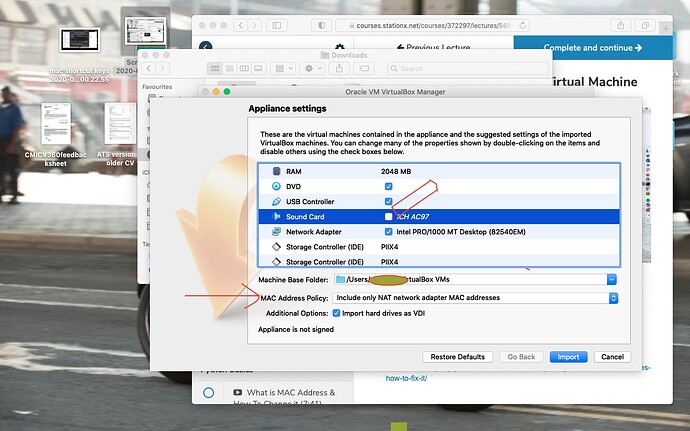